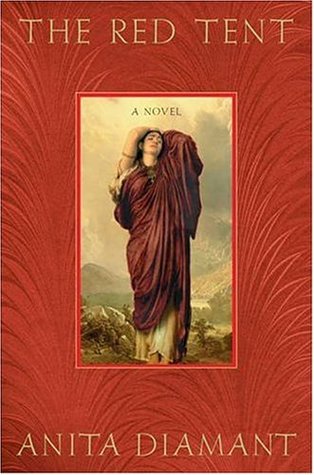 The Red Tent by Anita Diamant
Synopsis from GoodReads:
Her name is Dinah. In the Bible, her life is only hinted at in a brief and violent detour within the more familiar chapters of the Book of Genesis that are about her father, Jacob, and his dozen sons. Told in Dinah’s voice, this novel reveals the traditions and turmoils of ancient womanhood–the world of the red tent. It begins with the story of her mothers–Leah, Rachel, Zilpah, and Bilhah–the four wives of Jacob. They love Dinah and give her gifts that sustain her through a hard-working youth, a calling to midwifery, and a new home in a foreign land. Dinah’s story reaches out from a remarkable period of early history and creates an intimate connection with the past. Deeply affecting, The Red Tent combines rich storytelling with a valuable achievement in modern fiction: a new view of biblical women’s society.

There are no happy families in the Tanakh.  That is one of the first things the rabbi who taught my twelfth grade Hebrew School seminar on the stories contained in the Torah said to my class.  Eventually he would talk with us about why that was so, but that’s how he started the year.  The Red Tent takes those unhappy families and adds in the details that didn’t make it into the Tanakh, at least as researched and imagined by Diamant.

It’s generally agreed by rabbinic scholars that the Tankah isn’t meant to be read literally, at least according to the classes and lectures I’ve attended.  That isn’t to say that it’s completely allegory, of course, but it’s meant to stress the fact that time periods aren’t exact, among other things.  I’m writing that to say that I didn’t have a single problem with the way Diamant played with the timeline in her novel, turning seven years into one and so on and so forth.

I’m sure that some people who’ve read this book were puzzled or upset by her decision o have the story start with Leah and Rachel and that generation.  Personally, I’m a bit surprised she chose to skip Sarai and Abram’s generation, although considering the way she portrays Rebecca’s relationship with the other women, I suppose there wouldn’t be a way for those stories to be passed down from mother to daughter, which is part of the point of the novel – the traditions and stories you inherit from your same gender parent.

The way that Diamant recounts the history of the families as well as the genealogies and lines of descent make perfect sense given the biblical nature of the story and make a lot of sense, to me at least, given how often passages descend into x begat y begat z ad infinitum.  The way everyone was interested in lineages helped keep the novel’s biblical feel.

However, because of the narrative’s focus on the women characters, the men tend to be more one-dimensional.  Not all of them, as we see multiple sides to quite a few, but even those with more than one characteristic tend to end up mostly portrayed negatively, which goes against the biblical tradition of characters being virtuous AND flawed, not merely one or the other.  Unfortunately, too many of the males in particular remained either virtuous (Shalem, Hamor, Benia) or flawed (Simon, Levi, even Jacob to a large extent), with only some falling in the middle (Reuben, Judah, and Joseph before the third part of the book, where he, too, becomes mostly flawed).

I don’t feel that I have a lot to say about the story itself.  I mean, everyone even remotely familiar with Genesis knows exactly where most of the story is going.  The only surprises, so to say, are the truth behind Dinah and Shalem and where Dinah ends up after the destruction of Shechem.

The only other thing I would like to address is religion as depicted in this book.  For a Jewish writer who is known for her non-fiction Judaica work, this book felt surprisingly anti-monotheistic.  Now, that’s not a complete surprise because it’s set in a time when Elohim was still only just becoming seen as The God instead of one among many or chief among many.  So I wasn’t surprised to see polytheism everywhere I looked in the book because that’s historically accurate and I would have been surprised to see it otherwise.  But Elohim is portrayed as a merciless god only passed down among men while the women remain polytheistic and happier for it.  I realize that this takes place before the tradition of Judaism being matrilineal and that even the great patriarchs and matriarchs of monotheism started life as pagan polytheists, as depicted in the narrative, but I still would have expected to see more of an embrace of Elohim by the various characters.

Overall, this was a fascinating read and a very intriguing interpretation of Leah and Rachel’s story as well as Dinah’s story, even if it didn’t appear to do justice to many of the other stories or characters that fed into it.

This book counts for my pre-1500 slot for my When Are You Reading? Challenge.

One thought on “Review – The Red Tent”