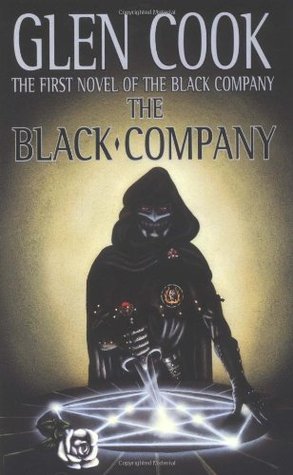 The Black Company by Glen Cook
Synopsis from GoodReads:
Some feel the Lady, newly risen from centuries in thrall, stands between humankind and evil. Some feel she is evil itself. The hard-bitten men of the Black Company take their pay and do what they must, burying their doubts with their dead. Until the prophesy: The White Rose has been reborn, somewhere, to embody good once more. There must be a way for the Black Company to find her… So begins one of the greatest fantasy epics of our age—Glen Cook’s Chronicles of the Black Company.

I’ve been told that since I like Malazan Book of the Fallen, I’ll enjoy The Black Company series.  And I liked this first entry, but I didn’t love it.

The summary provided on GoodReads, identical to the synopsis on the back of the book, is more than a little misleading.  The Black Company is employed by the Lady against the Rebels who claim to be working in the name of the White Rose, and they never do end up searching for the White Rose because they’re mercenaries, and when mercenaries start looking to betray their employer, they very quickly don’t have work anymore.

The entirety of the novel is told in first person by the Company’s annalist, Croaker, who also serves as their physician.  At times it feels as if the book is one of the annals, but at others it feels like a ‘regular’ first person past tense novel, if I can say that there is a regular way to do such a thing.  This can lead to an occasional bit of confusion, to say nothing of the lapses between what Croaker should know and what is conveyed to the audience.

On top of the back-and-forth not-quite-one-not-quite-the-other narrator, for a war novel this book is really kind of boring.  There are weird, sometimes unexplained jumps from one time and place to another.  Croaker mentions a couple of times that the Black Company is comprised of villains and blackguards and sometimes implies things, but he never really crosses the line into saying just how and why they are so bad, other than glossed over mentions of rape, pillage, loot, etc.  But again, glossed over.  So…

Further, it was hard to connect to any of the characters thanks to the narrative remove.  Croaker’s voice tends to be mild and he summarizes events instead of letting us feel them.  The mysteries surrounding Raven and the Captain, the curiosity about the Lady and Soulcatcher… those are the closest I felt to getting attached to characters.  I didn’t feel any huge emotions – other than disbelief over Croaker’s inability to put certain facts together regarding Soulcatcher when he was practically spelling them out for the reader.

I did appreciate the way that the world’s history – and the history of the Black Company itself – is hinted at, sometimes revealed and sometimes not.  I always love when you can tell that there’s a whole big world out there, and that there’s the weight of history both to the main characters and to everyone and everything they come in contact with.

Cook’s The Black Company is widely accredited by fantasy readers as being the start of the grimdark sub-genre of fantasy and I can definitely see and appreciate that even just in this first book.  But it’s the START of the sub-genre, so anyone looking for true grimdark fantasy might want to look elsewhere.  As previously mentioned, a lot of the true dark stuff is glossed over and put at a remove thanks to the narration coming through Croaker, with his desire to not smear his brothers.  On the other hand, there is a definite discussion of evil, and what it is and what makes it and all of that, and I can certainly see how other grimdark writers took Cook’s foundations and built on them.

Overall, it’s a solid start but there’s a lot of room for improvement in subsequent novels.  3 out of 5, and I’m expecting better from the next book in the series.