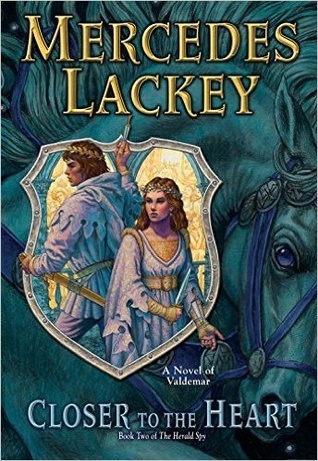 Closer to the Heart by Mercedes Lackey
Synopsis from the book:
Herald Mags, Valdemar’s first official Herald Spy, is well on his way to establishing a coterie of young informants, not only on the streets of Haven, but in the kitchens and Great Halls of the highborn and wealthy as well.
The newly appointed King’s Own Herald, Amily, although still unsure of her own capability in that office, is doing fine work to support the efforts of Mags, her betrothed.  She has even found a way to build an army of informants herself, a group of highly trained but impoverished young noblewomen groomed to serve the highborn ladies at Court, to be called “The Queen’s Handmaidens.”
And King Kyril has come up with the grand plan of turning Mags and Amily’s wedding into a low-key diplomatic event that will simultaneously entertain everyone on the Hill and allow him to negotiate behind the scenes with all the attending ambassadors-something which had not been possible at his son Prince Sedric’s wedding.
What could possibly go wrong?
The answer, of course, is “everything”.
For all is not well in the neighboring Kingdom of Menmellith.  The new king is a child, and a pretender to the throne has raised a rebel army.  And this army is-purportedly-being supplied with arms by Valdemar.  The Menmellith Regency Council threatens war. With the help of a ragtag band of their unlikely associates, Mags and Amily will have to determine the real culprit, amass the evidence to convince the Council, and prevent a war nobody wants-
-and, somewhere along the way, get married.

I said in my review of Closer to Home that I was looking forward to this sequel after how good that book was (much better than the prequel series about Mags, honestly).  And while Closer to the Heart didn’t disappoint me, it also didn’t wow me.

I loved watching Amily and Mags continue to grow into their roles.  While neither had any great emotional changes – which has held true for most of the books about them, actually – they continue to pick up new skills, settle into their responsibilities and adulthood, and entertain me as a reader.  On top of this, characters I enjoyed from CtH came back and continued to be entertaining, along with new characters whom I enjoyed getting to meet, specifically Coot, Keira, and Jorthun.

Speaking of Keira, I’m so happy to see Amily – along with others – continue to pursue the subplot from Closer to Home of offering more opportunities to women who feel themselves constrained by ‘should’ and ‘should-not’.  The societal changes they are working on – and that Mags is working on with his orphans as well as with Linden and Tuck – are great to see because it once again shows people helping other people move forward.  That optimism has always been one of my favorite things about Lackey’s Heralds of Valdemar.

Unfortunately, I never felt that the stakes in this novel were particularly urgent.  Yes, everyone made a big deal about the potential for war, and yes, Amily and Mags end up in what looks like a dire situation.  But I never believed for one moment that they wouldn’t get out of it, and I never felt like they would fail to find solutions.  I turned pages because I wanted to see where it was going, but I never felt pressured to keep flipping because of a sense of urgency.

3.5 out of 5 stars, and here’s hoping the third book, Closer to the Chest, due out in October of this year, continues the character and sub-plots while increasing the urgency.