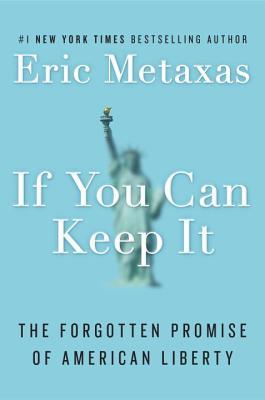 If You Can Keep It: The Forgotten Promise of American Liberty by Eric Metaxas
Synopsis from GoodReads:
If You Can Keep It is at once a thrilling review of America’s uniqueness, and a sobering reminder that America’s greatness cannot continue unless we truly understand what our founding fathers meant for us to be.  The book includes a stirring call-to-action for every American to understand the ideals behind the “noble experiment in ordered liberty” that is America. It also paints a vivid picture of the tremendous fragility of that experiment and explains why that fragility has been dangerously forgotten—and in doing so it lays out our own responsibility to live those ideals and carry on those freedoms. Metaxas believes America is not a nation bounded by ethnic identity or geography, but rather by a radical and unprecedented idea, based upon liberty and freedom. It’s time to reconnect to that idea before America loses the very foundation for what made it exceptional in the first place.

I’m not really sure how to review this book.  Not because it’s nonfiction, but because of the structure of this book.  So, here’s my best shot at it.

IYCKI is a set of mini-essays and stories about America.  Her founders, her heroes, her people – and, of course, from Metaxas’s own background.  The stories of Paul Revere, of Squanto, of Lincoln right before his election, of William Wilberforce, and so many others.  Metaxas uses these stories to flesh out where America came from – the ideas and some of the people – and to show why she is different.

The point of this book, unless I am grossly missing the point, is to show that seeing only America’s wrongdoings and seeing only her good points are equally wrong.  Her citizens must see both, accept both, and love her for what she is at her best while not denying that she has stumbled.  Much the way people should love each other, according to Metaxas.

For someone who’s trying to write accessibly, however, I have to say that Metaxas tends to go for the most complicated wording in some places.  Which is kind of funny, because a lot of what he quotes – most of it from before 1860 – is fairly accessible.  Especially when compared to some of his own word choices.

While I would overall class this book as interesting, there were definitely parts that got too Christian for my tastes.  Not too religious – but too specifically Christian.  I think of myself as a fairly faithful person – from a monotheistic religion – so I didn’t mind references to God, especially as it impacted figures who were religious, but I did feel that some of Metaxas’s arguments in favor of being certain ways were too Christian and that he referenced Jesus and other Christian trappings a bit too much.

If you’re an American citizen, you might want to at least look into Os Guinness’s Golden Triangle of Freedom, if not the entirety of this book.  If you’re not American, well… this book might annoy you.  Or it might not.  Read responsibly!

This book doesn’t get a rating because I’m a bit too all-over-the-place on it.  By which I mean I keep wavering between 2 stars and 4 without stopping in-between.  So there.