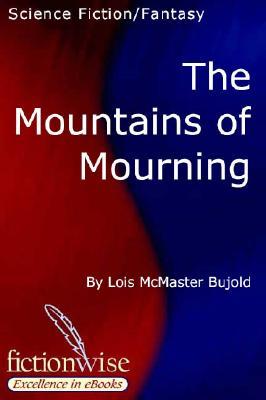 The Mountains of Mourning by Lois McMaster Bujold
Synopsis from GoodReads:
Twenty year old Ensign Miles Vorkosigan plays detective in a murder case, and tests the balance of power as a member of the Barrayaran nobility.

Seeing as this is a novella, this will probably be a short review, but I didn’t want to post it with my review of The Warrior’s Apprentice, which it is attached to, at least in the copy that I got my hands on.

Once again, Bujold proves her willingness to take on tough issues in a sci-fi setting.  In this novella, she handles infanticide, specifically the killing of babies with defects.  In making Miles, who would have been subject to that practice if he had been born to pretty much any other parents on Barrayar, the judge, his father, Count Vorkosigan, hopes to make it clear to his dependents that he is not willing to tolerate this practice any longer given the (relatively) new-to-Barrayar medical technology that can correct certain ‘defects’ or otherwise make it possible for such children to survive with relatively decent quality of life.

This case takes Miles into the hill country of his father’s holdings, where news is slow to travel and most people are still perfectly content to practice infanticide.  To pound this point home, Bujold has a character refer to the case as ‘infanticide that is actually murder’, with Miles thinking about the irony of the redundant thinking clearly portrayed in that statement.

It’s a bit of a twisty case, although I ended up guessing the correct murderer without too much trouble.  But then, the point isn’t the mystery behind the murder.  Bujold is making a statement about the beliefs that lead to infanticide as well as what it takes to change people’s thinking, not just on this issue but on any issue.

Miles has a long road ahead of him, it’s clear from this short story, but TMoM also shows that not only can he get there, he can bring people along with him.  Well, that was clear in The Warrior’s Apprentice, but it’s nice to see that it wasn’t a fluke or a one-off based on lies.  In TMoM he tells the truth, lying only by omission and even then it’s not much of a lie so much as keeping some of his history to himself, and still makes people believe not just in him but in the vision of the future he and his parents have worked so hard to create.

4 out of 5 stars.  I’m looking forward to seeing where Miles’s journey goes from here.