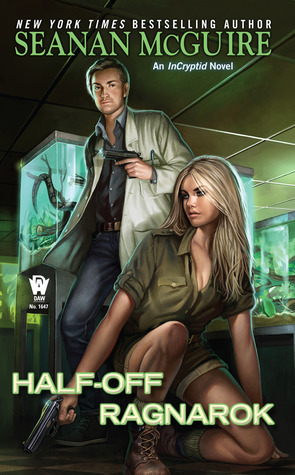 Half-Off Ragnarok by Seanan McGuire
Synopsis from GoodReads:
When Alex Price agreed to go to Ohio to oversee a basilisk breeding program and assist in the recovery of his psychic cousin, he didn’t expect people to start dropping dead. But bodies are cropping up at the zoo where he works, and his girlfriend—Shelby Tanner, an Australian zoologist with a fondness for big cats—is starting to get suspicious.

Worse yet, the bodies have all been turned partially to stone…

The third book in the InCryptid series takes us to a new location and a new member of the family, as Alex tries to balance life, work, and the strong desire not to become a piece of garden statuary. Old friends and new are on the scene, and danger lurks around every corner.

Of course, so do the talking mice.

With this, the third book in the InCryptid series, we change locations and narrators, moving from Verity in NYC to her older brother Alex in Ohio.  Being from Michigan, there are so many jokes I could make about the setting.  But I digress.

Alex’s view of the world, while similar to Verity’s, is different enough to a) keep things interesting and b) really drive home that it might be the same world but our narrator has well and truly shifted.  Not being male, I can’t speak to the accuracy of McGuire’s portrayal of first-person male narrator, but I didn’t find anything particularly jarring, so props to her.

It was nice to see some familiar cryptids while getting a good look at the unfamiliar ones, plus a bit more backstory for the Price-Healy family (although there are still a lot of questions there that I want answered).  Even if most of the cryptids mentioned and introduced can petrify people.  I’m not particularly sure why the title mentions ‘Ragnarok’, however, as the cryptids mentioned definitely skewed heavily Greek.  But then, there does seem to be a thematic naming thing going with the titles (Discount Armageddon being the first book in the series, although I’m not sure how Midnight Blue-Light Special fits in, since that doesn’t scream apocalypse to me…)…

Speaking of familiar faces, the Aeslin mice are back!  They are a major draw in this series for me, so it’s great that they continue to pop up.  And Sarah’s back, too.  It’s nice to have a very familiar face since everyone else in this book is either completely new or has been mentioned/only made minor appearances in the previous two books.

I don’t really want to talk much more for fear of giving away spoilers, but I will say that there were some interesting twists, a couple of ‘must you do that’ twists, and a decent amount of snarky humor.  All in all, a solid entry into an enjoyable series.