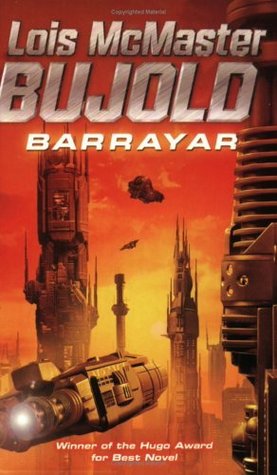 Barrayar by Lois McMaster Bujold
Synopsis from the back of the book:
Cordelia Naismith, legendary ship commander in the Betan Expeditionary Force, a woman who beat the Barrayaran militarists at their own game, was never one to fulfill stereotypes. Having married the commander of the forces her side defeated in battle, she was ready to settle down to a quiet life devoted to raising little Vor lordlings, interrupted only by the occasional ceremonial appearances required of the Lady Vorkosigan.

But Cordelia had not paid sufficient attention to what an important Vor lord she had married; when the Emperor died, only her husband’s reputation for honor stood between her adopted planet and the unspeakable horrors of a dynastic civil war fought by first-rate soldiers armed with up-to-the-minute technology.

First, a very minor complaint – why are all the GoodReads summaries for this series short and not really accurate?   Not that the ones on the backs of the books are much better.  I mean, Barrayar definitely doesn’t have cutting-edge tech for any field, plus that summary deals more with the end of the previous (chronological) book than with this one.  *sigh*

Moving on.  Fair warning: there are minor series spoilers below, all of them related to Miles, his life, and his health.  I don’t consider these spoilers due to the publication order, but you might.  Read at your own discretion.

I was surprisingly glad to get back to Cordelia’s narration as compared to Miles’s.  It’s not that I dislike Miles’s stories, but they feel very  chaotic and don’t tend to give me as much emotional pay-off as the two novels that center on Cordelia.  Watching her continue to grow and adjust to Barrayar – and force Barrayar to adjust to her – was wonderful, especially given the issues that this particular novel touches on.

Bujold is known – at least in the SFF community, I gather – for the topics her novels and novellas address.  Barrayar focuses on several, but the central one, in my view, is the issue of quality of life.  From reading future books, I know that Miles will be all right, despite the health issues he is forced to face, but watching Cordelia, Aral, and others make decisions about his survival focuses our attention on the decisions of parents, family, family friends, and doctors, the adults who must make choices before the child takes its first breath.

What would you do if you knew your child would be born deformed to the point where they might not live?  Or where, even if they did, they would require medical assistance for the rest of their lives?  What would you do if you knew that they would stand out, to the point where everyone else would stare and point and whisper and judge?  These are the questions asked in Barrayar.

Two societies examine these questions, encapsulated in several different people.  Cordelia alone represents a place where healthcare is advanced enough that a child would be expected to survive.  Maybe not thrive, but to live a full life, and not be judged too harshly for it.  Everyone else is, of course, Barrayaran, a society that practices infanticide of deformed children, that looks down on ‘mutants’ and ‘cripples’, and whose medical science, while on something of par with Earth today, is nowhere near as advanced as Cordelia’s Beta Colony.

Because of the rest of the series, we know who wins out, but the point, for me at least, was to see how each character reacted to the questions, which ones they focused on or tripped on, etc.  And Bujold depicts characters on both sides quite interestingly, to my way of looking at it.  Through the discourse, she challenges us to be and do better, by holding up two jagged mirrors of what we have been and what we are and what we could be.  And she does it in a way that I found to be truly touching.  The question of quality of life continues to haunt us to this day, in different ways than on Barrayar – or even back when Bujold wrote this novel – but it is still a relevant discussion and Bujold’s compassionate take on the issue shines through in her portrayal of Cordelia.

You’ll notice I haven’t spoken about the ‘plot’ of this novel.  And that’s because, to me, it’s secondary.  It wasn’t as engaging as the characters, and there were times when it felt absent or inconsistent – except at the end, when things ‘sped up’.  It was also fairly predictable for me, at least, but I’m an SFF fan, and I’ve read books that were, I can now see, clearly inspired by Bujold – or that she was inspired by, based on publication dates.  So, yes, there is a plot, but I would only rate it so-so for most of the book.  It really is about the characters, specifically Cordelia adapting to Barrayar and Barrayar adapting to her.

On a craft level, it’s true that Bujold’s characters and prose don’t really speak to me in the way other authors manage, and yet there remains something compelling, especially in this novel that hasn’t been present in her other novels that I’ve read.  I think it’s the compassion that is at the heart of Cordelia, a compassion that Miles shares but that isn’t as present in his novels.  Her compassion for Bothari, for her son, for life is so very present throughout this novel is what I think truly sells it to me, despite any quibbles I have over characterization and engagement.

Thanks to the way this novel touched me, I’m upping my rating to a 4 out of 5.  I think it is the strongest of the Vorkosigan Saga that I’ve read yet, although I don’t recommend just jumping in.  There are (two) reading orders for a reason, after all.