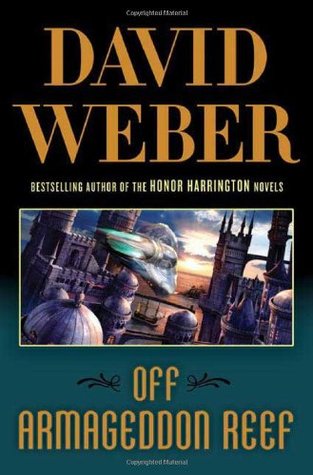 Earth and her colonies are now smoldering ruins, and the few survivors have fled to distant, Earth-like Safehold, to try to rebuild. But the Gbaba can detect the emissions of an industrial civilization, so the human rulers of Safehold have taken extraordinary measures: with mind control and hidden high technology, they’ve built a religion in which every Safeholdian believes, a religion designed to keep Safehold society medieval forever.

800 years pass. In a hidden chamber on Safehold, an android from the far human past awakens. This “rebirth” was set in motion centuries before, by a faction that opposed shackling humanity with a concocted religion. Via automated recordings, “Nimue” – or, rather, the android with the memories of Lieutenant Commander Nimue Alban – is told her fate: she will emerge into Safeholdian society, suitably disguised, and begin the process of provoking the technological progress which the Church of God Awaiting has worked for centuries to prevent.

Nothing about this will be easy. To better deal with a medieval society, “Nimue” takes a new gender and a new name, “Merlin.” His formidable powers and access to caches of hidden high technology will need to be carefully concealed. And he’ll need to find a base of operations, a Safeholdian country that’s just a little more freewheeling, a little less orthodox, a little more open to the new.

And thus Merlin comes to Charis, a mid-sized kingdom with a talent for naval warfare. He plans to make the acquaintance of King Haarahld and Crown Prince Cayleb, and maybe, just maybe, kick off a new era of invention. Which is bound to draw the attention of the Church…and, inevitably, lead to war.

I really wanted to like this novel.  I love the Honorverse and its spinoffs, despite some minor problems with them, and I think Weber is a great writer.  Unfortunately, I really can’t overlook some problems that were, for me, rather difficult to overlook.

First off, there are the characters.  Let’s start with their names.  Safehold’s ‘English’ has shifted. We’re told this in the first part, which I’m thinking of as the prologue since it sets up the idea of Safehold – where it came from, how its people were adjusted, etc.  Okay, so the language has shifted, fine.  But you can just mention that and then not drastically change the spelling of people’s names to the point where hitting a name jars me out of the reading experience because I have to figure out how to say it.  For an example, let’s look at the name of the king mentioned in the summary above: Haarahld.  That’s supposed to be ‘Harold’, near as I can tell.  And that’s one of the easier names to figure out.

Second point about characters is gender.  No single female character got more than one scene other than Nimue, and she disappeared after the ‘prologue’ thanks to becoming Merlin.  Not counting Nimue/Merlin, the number of female characters with speaking roles is probably about half a dozen.  At most.  And most of them are dead by the end of the ‘prologue’.  This leaves a VERY male-heavy story, when I’m used to a much more egalitarian mix from Weber.  And you can’t count Nimue/Merlin, because Merlin uses exclusively male pronouns, even in his own head.

The stated reason for the male dominance is that Safehold has somehow reverted to a patriarchal society a la 1800’s or earlier cultural norms.  Everyone is a position of power is male with one exception, but that particular queen only appears once and that is to be forced to do the bidding of the men running the church.  And I honestly don’t buy this society.  The religion has female archangels as well as male, and there isn’t a lot of childbed fever or anything like that.  So yeah, that was a bit frustrating and completely blindsided me.

The next problem I had is that there is a lot of ‘techno-babble’.  And a lot of it I couldn’t skim because then I’d lose the thread of what was happening because the action depends on at least some understanding of the technological changes.  Yes, I get that there is a lot of technological changes being introduced and then moving forward and changing, and all of that is very important to the main plot, but it’s hard for a layperson like me to follow along.

My final problem was that the pacing seemed to drag on and on and on.  With nothing much going on.  A lot of this book was background political intrigue or technological changes or Merlin dancing around where he came from/what he is/the ideas he’s introducing, all of this punctuated with very brief action scenes (until the end).  Added to the strange character names and the constant technology information, it was hard to get into this novel and hard to stay engaged.  Arguably, for the first half, the war against the Gbaba sounded a lot more interesting than reading about Charis’s technological advances or the Church Vicars being concerned about said advances.

And yet, despite all of my problems with the novel, I’m going to continue reading, because there are some really interesting aspects to consider.

First, I am curious to see where everything is building.  Eventually, Merlin plans to oversee Safehold advancing to such a great technological decree that humans once again take to the stars and once again fight the Gbaba.  Hopefully with the ability to win this time.  I realize that that’s on a grand scale, but Weber’s shown that he’s not afraid to think in those terms.  So I’m hopeful that future books will eventually ‘time skip’ ahead so we can see Safehold grow.

Second, Merlin himself is interesting because there are several really interesting ways he can be developed.  He started life as the cybernetic avatar of Nimue Alban, a woman, implanted into what is essentially an android body.  It is Nimue’s conscious that chooses to turn the android into a male body and to take on the name Merlin.  From that point on, Nimue is ‘dead’ and the android and its cybernetic conscious thinks of ‘himself’ as Merlin, a man.  But it’s not so easy to change something like that, and, even though we didn’t really know Nimue that well, it’s still easy to see that Merlin’s personality is basically the same as Nimue’s.  So I’m curious to see if Weber will ever address what should be some kind of body/gender dysphoria.  I’m also curious to see if Merlin’s sexuality will be addressed beyond a brief mention of ‘yep, still attracted to males, okay then’.  Basically, Merlin’s development in general is of interest to me.

And, finally, I’m invested in Charis now.  I like the people of Charis whom I’ve met and I want to see what happens with them, where they go from here on their journey towards, well, survival.  I’m especially curious to see how far they’ll turn from the Church that just tried to destroy them, since Safehold is essentially a theocracy.

The total is 2.5 stars.  A hard choice, but there just wasn’t enough of what I wanted to see.  I’m hoping that score will improve with later novels.

(On a completely unrelated note, Weber REALLY likes c. 1800’s England/The British Empire.  Unsurprising considering I believe his background is naval history.  Just a thought since, well, it shows in all of his work.)