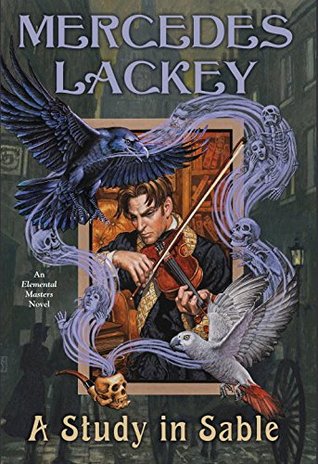 A Study in Sable by Mercedes Lackey (Elemental Masters #11)
Synopsis from GoodReads:
Psychic Nan Killian and Medium Sarah Lyon-White—along with their clever birds, the raven Neville and the parrot Grey—have been agents of Lord Alderscroft, the Elemental Fire Master known as the Wizard of London, since leaving school. Now, Lord Alderscroft assigns them another commission: to work with the famous man living at 221 Baker Street—but not the one in flat B. They are to assist the man living in flat C. Dr. John Watson and his wife Mary, themselves Elemental Masters of Water and Air, take the occult cases John’s more famous friend disdains, and they will need every skill the girls and their birds can muster!

Nan and Sarah’s first task: to confront and eliminate the mysterious and deadly entity that nearly killed them as children: the infamous Haunt of Number 10 Berkeley Square. But the next task divides the girls for the first time since they were children. A German opera star begs Sarah for help, seeking a Medium’s aid against not just a single spirit, but a multitude. As Sarah becomes more deeply entwined with the Prima Donna, Nan continues to assist John and Mary Watson alone, only to discover that Sarah’s case is far more sinister than it seems. It threatens to destroy not only a lifelong friendship, but much, much more.

I’m normally a really big fan of Lackey’s work, but the Elemental Masters series isn’t one I follow too closely.  Thankfully, you don’t have to read them in order as most are only interconnected by setting – Victorian Era Great Britain, but with secret elemental and psychical magic.  However, A Study in Sable continues the tale of Nan Killian and Sarah Lyon-White, which began in the short story Grey, I believe, and I found that knowledge of Nan and Sarah – and Lord Alderscroft’s place in their life – helped quite a bit with this particular novel.

Now, normally I don’t like Sherlock Holmes spinoffs or retellings.  I just usually find that they don’t work for me, for some reason.  There are exceptions, and I’ve found some enjoyable, but usually I pass.  I’m glad I didn’t with this one because it didn’t irritate me for two very important reasons: 1) it’s set in the correct time frame with the original Holmes, Watson, and Mary Watson; and 2) Holmes is barely in it.  When he is present, he seems to be very much ‘in character’, thankfully, scoffing at magic but willing to hold to his golden rule, among other common traits.  Also, Watson himself seemed in character during his appearances (I can’t speak for Mary as I don’t really recall her from the story about her, and I don’t think she makes a physical or verbal appearance in any of the other stories).

So the inclusion of Holmes and the Watsons wasn’t a problem for me (other than the fact that Holmes was said to be fictitious in an earlier novel).  The problems arise elsewhere.

Now, this series is based on fairy tale retellings, which I often love, set in a world of magic.  However, the fairy tale that I believe this one is based on was only very loosely used (Fair Rosalinde, for those familiar with it, if I’m correct), and if it wasn’t based on that one then I have no clue which one this is supposed to be, which makes it rather far afield for the series.

On top of ‘losing the plot’ to some extent – more than fairy tale retellings usually do – it felt like too much was being thrown in.  Yes, a thread from Nan and Sarah’s very first story was wrapped up, but to what end other than background noise and padding?  Oh, we’ve brought in Sherlock Holmes so we need to make a mention of Moriarty, if only to keep Nan busy.  What’s that, this part with Sarah would be boring?  Then let’s give Nan some busywork elsewhere.  Oh, if we stayed with Nan we’d reveal the solution for Sarah’s plotline?  Okay, time to jump back to Sarah.  And so on.

I understand that Sarah’s plot meant there would be ‘boring parts’ – but glossing over them by giving Nan what feels like busywork didn’t help.  Not for me, at least.

On the plus side, however, it was great to see Nan and Sarah be given more space to stretch than just a side plot in someone else’s novel, and I truly enjoyed seeing their interactions, but I also think that Lackey’s Elemental Series is trying to incorporate too many elements (pun intended) in its world mythos.

3 out of 5 stars for my final January BeatTheBacklist novel.