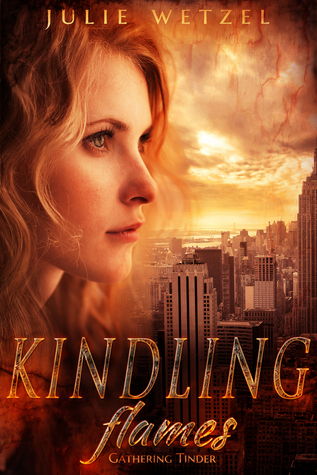 Gathering Tinder (Kindling Flames #1) by Julie Wetzel
Synopsis from GoodReads:
Fresh from college and with no real work experience, Victoria Westernly considers herself lucky to land the coveted position of personal assistant to Darien Ritter, the CEO and owner of a multibillion-dollar company. His busy schedule and eccentric ways are enough to keep her on her toes. But, all is not what it seems when she discovers the handsome man employing her just happens to be the most powerful vampire in the area.

And it’s also part one of two.  It would’ve been nice to know that before I started reading it, since then I would have expected the cliffhanger at the end.

The reason I use the word cliffhanger is because everything stops basically in the middle of the action.  Nothing is resolved.  No questions have been answered.  And there was  no warning that this was going to happen, unless you happened to find the note that said it was part 1 of 2.  Which I didn’t.  So I was a bit shocked at the abrupt ending, but that’s how it goes.

I don’t remember why I got this book, other than that it was a free kindle book (and I sometimes use my phone like a kindle just so that I’ll have a book on hand all the time), but it was probably because someone posted about it since this is a little far outside my usual preferences.  By which I mean it’s romance-heavy paranormal romance.  I usually prefer mine to be more action-heavy, plot-heavy, or myth-heavy.

So, since it’s romance-heavy, let’s look at the romance.  It thankfully didn’t read as insta-love, but it’s definitely not a slow-burn, either.  The characters aren’t together at the end of part one – haven’t done anything, really – but they’re clearly moving in that direction, and it’s going fairly quick.  Which, fine, Wetzel makes it believable enough for my tastes.

But the plot itself is pretty light.  Yes, there are murders going on that need to be solved, but they mostly take a back seat to the Darien-and-Vicky show.  Which again, fine.  It’s a romance-heavy book, I get that.

However, the novel was split into two parts for length reasons – but this isn’t long at all.  Maybe it was billed more in the romance section than the fantasy section?  Or maybe the author or publisher just wanted more money.  Either way, I think it’s a bit silly to split a book this short in two.  Unless part 2 is really long, which I’m not expecting.

If you’re looking for a quick read and you like paranormal romances with vampires, this is a good book for you.  Unfortunately, it wasn’t what I was hoping it was going to be.