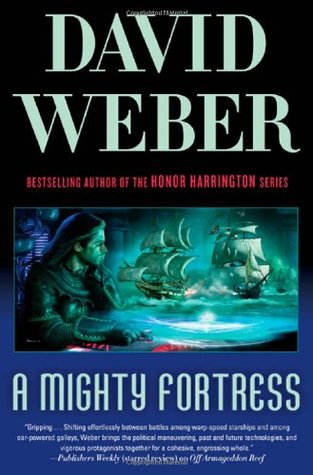 The good news is that I’m still enjoying this series.  The action remains interesting, many of the characters are engaging, and not all of the ‘bad guys’ are evil for the sake of evil (although some certainly are).

However, there are still some problems with this book in particular and the series as a whole.  Thankfully, the grammatical and spelling errors that littered earlier books in the series have been severely curtailed by this, the fourth book in the Safehold series.

Unfortunately, the names remain a major sticking point for me.  The spelling versus pronunciation is very distracting and still brings me out of the book, either with new names or with names that I feel like I should know but don’t.  Again, I understand that this was a stylistic choice from the beginning, meant to show the language shift, but it still doesn’t work for me.

The second main problem in this particular novel is the question of gender and sexuality.  Nimue Alban is effectively dead – the main character thinks in masculine terms and with the name Merlin.  Even in private.  All the time, nonstop.  But in the first book, he was still attracted to males, and therefore took his cybernetic body’s sexual functions offline to avoid embarrassment – and possibly worse, although homosexuality hasn’t been discussed at all on Safehold, not even when talking about sexual perversions (those seem to mainly be pedophilia).  I was all right with this and actually thought it worked rather well because it showed that Nimue was still in there.

In this novel, however, we have a direct contravention of several of those facts: Merlin is sexually active with a woman and notes that, in this body, he is attracted to women, meaning either Nimue’s base personality is strictly heterosexual, regardless of the gender s/he finds hir body to be, or else Merlin has discovered something about Nimue that she never suspected.  In previous books, we have still had glimpses of attraction to men, but not in this novel.

Further, Merlin refers to himself as ‘one of these uppity women, in a roundabout way’ (I’m paraphrasing, but close enough).  Now, since there is absolutely no sign Merlin still considers himself a woman in any way, shape, or form (as of this book; you can make a case for the prior three), this can be seen as a bit insulting.  Especially when you consider the continued minority of female characters, particularly POV female characters.

Despite that, however, I’m still enjoying the series.  It remains engaging and I remain eager to see where it goes.  Perhaps that’s because of the parallels I see between Charis and Israel – ‘the question of Charis’, indeed! – or perhaps it’s testament to Weber’s skills at creating a believable world, believable struggles, and something to invest in.  Maybe it’s both.  Either way, I’m still eager to see where the series goes.

This one gets 3.5 stars out of 5.  I really wanted to rate it higher, but the two scenes that dealt with gender and sexuality – specifically Merlin’s – are sticking with me too much, and in a way that’s a bit too negative to ignore.