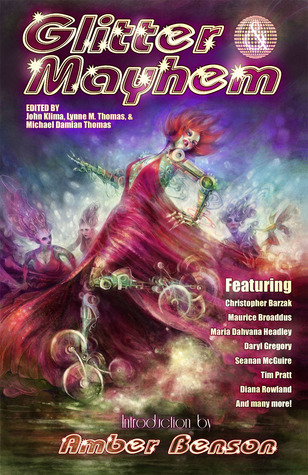 Dance through nightclubs, roller derby with cryptids and aliens, be seduced by otherworldly creatures, and ingest cocktails that will alter your existence forever. Your hosts are the Hugo Award-winning editors John Klima (Electric Velocipede) and Lynne M. Thomas (Apex Magazine), and the Hugo-nominated editor Michael Damian Thomas (Apex Magazine).

Well, unfortunately for Glitter and Mayhem, it didn’t quite live up to the promise on the back cover (the one about being the most glamorous party in the multiverse).  Most of the stories contained therein were entertaining and all of them did contain glitter, roller derby, night clubs, or some combination of the above.  But quite a few of them left me disappointed.

Let’s start with the short story that made me pick this collection up in the first place: Seanan McGuire’s “Bad Dream Girl”.  I’m still struggling with Antimony, unfortunately.  Maybe it’s because I’m such a big fan of her older sister Verity – whom Annie very much dislikes – but every time Annie talks about her family I want to shake her, hard.  Ignoring that, though, I actually rather like Annie, and I enjoyed getting to see her really getting into roller derby, which she had only just tried out for in the last short story about her.  I liked the way this story developed and I loved the ending twist.

Now onto the rest of the stories, since I did end up reading all of them.

This collection is incredibly diverse while sticking to the theme, which was fantastic because it meant I usually found a story I liked right after one I didn’t like as much.  Since I’m writing this review about a week after I finished the book (I really struggled with how to write this review since my main focus was on “Bad Dream Girl”) I might miss one or more of the stories that I really liked, so apologies for that.

The book opens with a fairy tale retelling and closes with a fourth-wall-breaking twisty-bend of a fairy tale ‘retelling’, which I thought was a great cyclical idea since a lot of the stories deal with people coming back over and over again to the clubs/rinks/etc. that are so good or so bad for them.  I only wish that I liked those two stories more than I did.

“With Her Hundred Miles to Hell” by Kat Howard was so awesome.  Greek mythology is one of my favorite things and I felt that it was done so well here.  Some of the aspects of the story were a little confusing and I think this would have benefited from being a bit longer so that more of the mysteries could be unraveled.

I really enjoyed “Subterraneans” by William Shunn & Laura Chavoen but I wish there’d been a bit more.  Specifically I wanted to know more about the club’s owner/dispenser of the pills because we got a lot of hints about her but never anything concrete enough for me, at least, to figure out her deal.

“Two-Minute Warning” by Vylar Kaftan was another one that I wanted more of.  It was one of the shortest stories in the collection as I recall and we got a glimpse into this really cool world of some kind of VR tourney-game (I think?) and I just wanted to know more about the game (legal and illegal versions) plus about the siblings who were the main characters.

“A Hollow Play” by Amal El-Mohtar was absolutely lovely.  I loved the depiction of shape-shifters and how it must feel to be trapped in one body that isn’t yours, and the relationships, both platonic and romantic and neither, were wonderfully written.  This was possibly my favorite story in the whole collection.

And then I just have a special shout-out for “Bess, the Land-Lord’s Daughter, Goes for Drinks with the Green Girl” by Sofia Samatar because I love both of their stories and it was such fun to see them having fun together.

There were other short stories that I liked, but these were the ones that stayed with me.