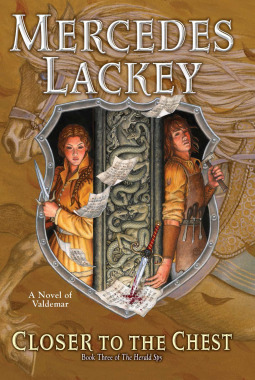 Closer to the Chest by Mercedes Lackey
Synopsis from GoodReads:
Herald Mags, the King of Valdemar’s Herald Spy, has been developing a clandestine network of young informants who operate not only on the streets of the capital city of Haven, but also in the Great Halls and kitchens of the wealthy and highborn. In his own established alternate personas, Mags observes the Court and the alleys alike, quietly gathering information to keep Haven and the Kingdom safe.
His wife Amily is growing into her position as the King’s Own Herald, though she is irritated to encounter many who still consider her father, Herald Nikolas, to be the real King’s Own. Nonetheless, she finds it increasingly useful to be underestimated, for there are dark things stirring in the shadows of Haven and up on the Hill. Someone has discovered many secrets of the women of the Court and the Collegia— and is using those secrets to terrorize and bully them. Someone is targeting the religious houses of women, too, leaving behind destruction and obscene letters.
But who? Someone at the Court? A disgruntled Palace servant? One of the members of the Collegia? Someone in the patriarchal sect of the god Sethor? Could the villain be a woman? And what is this person hoping to achieve? It isn’t blackmail, for the letters demand nothing; the aim seems to be the victims’ panic and despair. But why?
Mags and Amily take steps to minimize the damage while using both magic and wits to find the evildoer. But just as they appear to be on the verge of success, the letter writer tires of terror and is now out for blood.
Mags and Amily will have to track down someone who leaves few clues behind. They must thwart whatever plans have been set in motion, and quickly—before terror turns to murder.

Unfortunately I found this book rather disappointing.  For one thing, the heat is used as an excuse to make everyone short-tempered and snappish.  But we’ve had that used as a plot device before in this sub-series and in its immediate prequel, the Collegium Chronicles.  I’m getting rather sick of that being the only way to create inter-personal conflict between first Mags and his friends and now Mags and Amily.

Secondly, for a mystery, there was no mystery.  We were never given any potential bad guys except for one group, so of course the good guys should be investigating them – but they don’t until about two-thirds of the way through the book.  It makes them look rather stupid, honestly, especially given the way the leader pings Amily’s radar from the very beginning.  I did like that Rolan doubted her because it reinforces the whole ‘Companions aren’t perfect/always right’ aspect that we’ve seen in other novels, and it reminds us that Rolan and Amily are still feeling out their relationship.

But I didn’t like how it was used to say that Rolan and Amily are having trouble communicating because of their different genders.  There were several moments, and not just in that relationship, when I wanted to bang my head over lines that tried to reinforce that because they just felt heavy-handed.  Yes, they go along with the theme of the novel to some extent, but they also read a bit awkwardly at times.

And then there’s the continued use of the Web-stone.  Because it needs to be rediscovered in chronologically later novels in the Valdemar series, it feels almost wrong to have it so present  in this series.  Especially since it was successfully forgotten prior to being rediscovered a couple of novels ago.  It’s just so odd that it’s there, I guess, given what I know of the world mechanics both past and future.

On the positive side, though, I loved getting to see Mags’s growing circle of allies.  Watching him interact with Amily and Sedric or with Teo was really great, and I’m looking forward to seeing Amily, Sedric, and Mags continue to grow up and work together.  I just wish Lydia hadn’t been side-lined.

Actually, that leads into my next point/complaint which is that, more than other Valdemar sub-series, both the Collegium Chronicles and the Herald Spy series will introduce a lot of characters and then basically drop them.  People who were important in one book are lucky to get name-dropped three books later.  Since most of them never got a lot of development anyways it’s not a major problem, but it is something I’ve noticed about these novels.

I’m not sure if the Herald Spy is over now or if it will be a five-book series like CC, but either way, I’ve at least gotten some enjoyment out of the novels, even if they haven’t been my favorite in the Valdemar series.

3 out of 5 stars, making this my least favorite of the Herald Spy series (so far, and by rating).

One thought on “Review – Closer to the Chest”