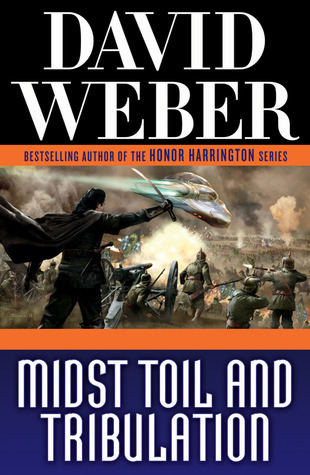 It took THREE MONTHS for my Inter-Library request to come in, but here it is at last.  And yes, I finished it within a few days of it falling into my hands.  Weber’s always been readable – if you skim some of the more technical passages, in my opinion.

Unfortunately, this novel felt draggier than some of the others in this series.  Part of that is, undoubtedly, because I’m still having trouble with the names.  And a three month break between books doesn’t help with that at all.  In fact, I felt back at square one when it came to names again, although at least I (mostly) remembered who everyone is.

Secondly, there is a lot of technological jargon in this book.  Well, every book in this series has a lot, but I’m not sure if it was my prolonged break or something else that made MTaT feel like it had more than the usual amount.  But it felt excessive, somehow.  Even knowing that there’s an industrial revolution going on.  Still, for those interested in that, congratulations, Weber shows his work.

And, finally, there felt like a lot of unnecessary repetition.  I know part of that is people knowing something before they should having to pretend that they’re waiting for the snail mail and part of it is filling in other people, but this book just felt…fluffy.  Which is odd, considering that it focuses on a very brutal civil war with heavy religious overtones.

Which brings us to what I did like: the war.  Not because it’s war, of course, but because of the way Weber takes pains to show us how the hate is building on both sides, the hypocrisy about ‘they did THIS so of course they’re heretics’ by people who started the massacres/rapes/etc., the brutality (esp. in winter campaigns when the food sources and routes to bring food in have been sabotaged), and the see-saw atrocities, to quote one of the characters.  I like the way people on both sides are trying to cling to their humanity in the face of provocations – as well as the way people on both sides are shown as being willing to descend into horror.

And of course I’m still enjoying the characters.  Watching Irys, in particular, grow gave me great enjoyment.  And I’m always happy to have more female POVs when this is a male-dominated series and society.

Finally, the philosophy continues to engage me, especially given one of Merlin’s, ah, private decisions regarding another character (I don’t want to give it away, but if you’ve read the book you’ll know who I’m talking about).  Yes, a lot of it has a vague religious bent, but that’s not a surprise considering the background of the characters.  And, honestly, I found it more spiritual than religious (what is a soul, can a computer that thinks it’s a human have a soul, etc.), so maybe that’s why it doesn’t bother me as much as it bothers other people.

Overall, however, I did still feel like it dragged, so that brings the rating down to 3 stars.  But if you’re still enjoying the series, please keep reading – I know I’m determined to stick it out to the end (just three more!).