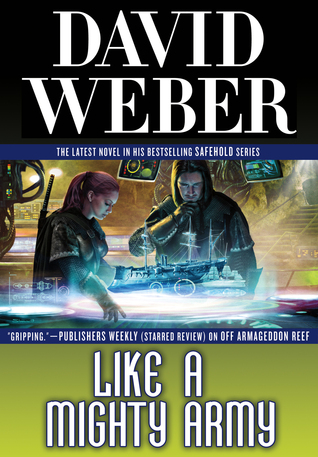 If you count actual reading time, this was a very quick read.  Which is impressive considering the size of this book and the fact that I’m still stopping every so often to puzzle over names.

But the fact that I’m still reading this series certainly does say something, I think, about the engagement level.  And, quite honestly, I do still think that this series is quite engaging even if almost none of my criticisms have changed over the course of seven book.

I’m still struggling with the names.  I’m still skimming a lot of the industrial revolution passages.  And I’m still not happy with the comparative paucity of female voices.

But we’re getting more female voices as the series continues, and all of them belong to women who are doing things, not having things done to them (for the most part).  We’re getting more exploration of Merlin vs. Nimue, which has been another of my consistent criticisms.  Thanks to certain spoilery developments I’m expecting more, but so far we haven’t gotten as much as I thought we’d get thanks to said developments.  But I live in hope.

And, of course, the exploration of philosophy, religion, and human nature continues to be top-notch.  I can’t say it’s always as in-depth as I would like, but Weber is definitely not shying away from exploring what happens with civil war, religious war, and slave rebellions – on BOTH sides of all three of those.  This started with the last book but I have to say that I’m very impressed by the way he’s continued to show men on both sides who are trying to stop atrocities – and men on both sides who are more than happy to descend to that level.  I hesitate to say women since we still have so few of them and almost none in combat situations.

I will say that there is definitely clear bias in that most of the ‘gross’ POVs belong to the side opposing our protagonists but that does also have to do with who started what and who’s more willing to descend into horror, so in a way it’s believable and it doesn’t disrupt my experience WHILE I’m reading.

This is still probably my least favorite of the Weber series I’ve read, but that’s not to say I dislike it.  If you like naval battles, the industrial revolution, and don’t mind the horror and gore that come along with religious warfare, I encourage you to give this series a try.

3.5 out of 5 stars, and here’s hoping the rest of the series keeps getting better.