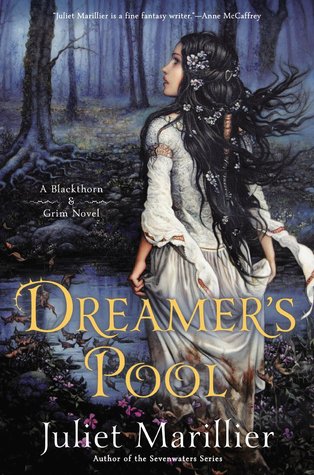 Oh hello usual struggle with first-person narratives.  I have a love-hate (mostly hate, if I’m being honest) relationship with first person.  Even when it’s rotating, like this one is.  On the plus side, I never had trouble telling the three POV characters apart.  On the downside, I didn’t especially care for anyone.

I sympathized with Blackthorn and I think I could have come to like Grim if there had been more, but Oran tended to be frustrating and boring by turns (with some likeable moments) and overall Blackthorn seemed very one note.  Except for when the plot needed her to be nice to people.

Other characters were interesting, especially the druid Oisin (whom I wish we’d gotten to see more of) and Conamel (whom I really want to know more about), but overall they didn’t get especially fleshed out.  The psuedo-antagonist in particular felt a little all over the place.  I was never really sure why she acted the way she did other than she didn’t ‘get it’, and even that is an assumption on my part.

I read this novel rather quickly, but that is completely due to my interest in the fae aspects.  I liked seeing how Blackthorn and Grim solved the two mysteries that were brought to them and I loved the story-telling aspects woven into the novel.  But a lot of the novel felt like it was ‘wait-and-see’.