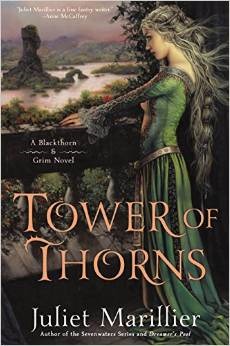 Well it was better than book one, Dreamer’s Pool.  But I still can’t say I loved it, unfortunately.

I was very happy to see one less first person POV, although Geileis’s (third person) sections simply made me actively dislike her instead of the passive dislike I had thanks to Blackthorn and Grim’s sections.  I honestly hated her before the big reveal towards the end (and I definitely guessed some of the twists, but that might simply be my knowledge of existing fairy tales/fae stories).

Speaking of fairy tales, I love the use of stories in general in this series so far.  That was actually the one thing I liked about Geileis’s sections: the story she told, the use of it, and the idea that oral tales are meant to be built upon, that the framework is what’s important but the details are there to shift dependent on the specific telling.  This idea was present in the first book but it takes on new meaning here in Tower of Thorns thanks to Geileis’s tale-telling and I loved the expansion of it.

I also enjoyed the expansion of the background mythos of the world of Erin (aka Ireland).  We’ve had fae present from the beginning thanks to Conmael but now we get more of a view of the ‘everyday’ ones.

The first person sections still had large chunks of robotic overtones where I was told I should be feeling something but I honestly couldn’t muster much emotion beyond curiosity about where the story was going.  There are some significant points where I did feel emotion, of course – namely everything going on with Grim at the monastery and with learning his backstory (which I did not expect, so points to Marillier for that) – and those moments saved the book from being simply blah.

And I do feel that I got to see more of who Blackthorn and Grim, especially, are.  I feel a bit better about why Grim is so loyal to her and I think I understand why Conmael’s interested in her now, among some other things.  I still want more personality from both of them – a lot of it still feels like I’m being told that they’re like this or that rather than shown.  Although Grim is unreliable when it comes to himself and Blackthorn’s defining characteristic, stubbornness, is shown very well.

The background characters got more development in this than in Dreamer’s Pool, I felt, although they were a whole different cast of characters for the most part.  That’s not necessarily a bad thing but I was hoping to see more of Flidais after the end of book 1 and that didn’t really happen.

3 out of 5 stars.  An enjoyable enough read, but the ideas of storytelling are what are going to stick with me, not the story itself.