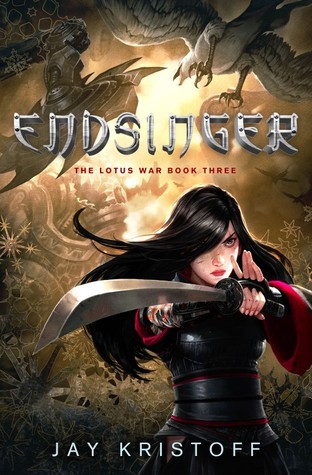 Endsinger (Lotus Wars #3) by Jay Kristoff
Synopsis adapted to keep spoilers down (warning, above link has a spoilery summary):
Yukiko and Buruu, mind-bound Stormdancer and thunder-tiger, have returned to the Kage Rebellion, ready to continue the fight against the Lotus Guild, their poison, and their puppet Shogunate.  Their allies are dead, demoralized, betrayed, and ripe for failure.  Their enemies continue to grow in strength and number.

Yukiko and Buruu will need new allies if they are to defeat their enemies.  Luckily, they both know where they can find some – if old hurts can be healed, secrets laid to rest, and new ties forged in the face of betrayal.

As the earth splits asunder, as armies destroy each other for rule over an empire of lifeless ash and the final secret about blood lotus is revealed, the people of Shima will learn one last, horrifying truth.

There is nothing a mother won’t do to keep her children by her side.

I knew going in that this book was going to hurt my heart.  I just didn’t realize how much.

Going back over old posts, I’ve realized that I never posted a review for either of the previous two novels in this trilogy, so I’m going to try and sum up my feelings for the entire trilogy in this post, so sorry to anyone who came looking only for Endsinger.

The Lotus War Trilogy is a story about war, the bonds between people, blind obedience vs independent thought, different shades of betrayal, the meaning and shape of a hero – and who you are.  The key question, from book 1 to book 3, can be summed up in the question Buruu asks Yukiko over and over again, one that she asks of herself: who are you?  Not what.  Who.

Kristoff’s shifting POV shows a wide variety of people attempt to answer that question as they struggle to find their place in their country and in an ongoing war.

But The Lotus War isn’t just about how people grow when faced with war, loss, and decisions they never wanted to make.  It’s also a cleverly woven tale using Japanese mythology, a bit of history between Russia and Japan (anyone remember the wars between these two back in the early 20th century?), and some traditional Western-style steampunk ideas translated into Japan’s samurai culture.  I suppose in a way you could consider it alternative history, the way most steampunk can be seen, only with a fantastical twist – again, the same way a decent amount of steampunk novels set in the West tend to go.

The world is rich and vividly described, from the red sky to the polluted land and rain.  Kristoff is skilled with his descriptions of location, people, and emotional states, drawing you in just to break your heart over and over again as people die, grow, and redeem themselves.  He even manages to bring sympathy to many of his works antagonists in my opinion.

I put off reading Endsinger because I knew it was going to hurt my heart, not because of any failing on Kristoff’s part.  I simply wanted the time to recover – and I hoped that I’d stop picking up books that ripped out my heart long enough to be ready for this one.  Unfortunately that didn’t happen so I read it anyways.  And my only regret is waiting so long to finish the series.  It meant some of the details of the first two books were a bit hazy, although thankfully Kristoff provides a Who’s Who at the beginning of Endsinger, including where we last saw these characters, even if we last saw them dead.  That greatly helped me remember everyone, both where they were and who they were.

Speaking of characters, I feel like each book showed me a new side of pretty much everyone.  Yukiko, Buruu, Kin, Hiro, Kaori, Hana, Yoshi, and so many more beside, all of them grew as they faced challenges and all of them slowly revealed the layers that made them up.  These are real people making tough, almost impossible, choices and then having to learn how to live with their choices and the choices of other people that impact them.  They make mistakes and they learn and grow from them – those who survive.  And I love them for it.

If you like fantastical steampunk or Eastern mythology, you will enjoy this series.  I’m not normally a fan of fantastical steampunk, I’ll be the first to admit that, but something about The Lotus War just worked for me.  Maybe it was the vivid descriptions or maybe it was the mix of mythology and humanity, I don’t know, but this series was amazing and I highly recommend it.

4 out of 5 stars for Endsinger.  And the series as a whole, being honest.