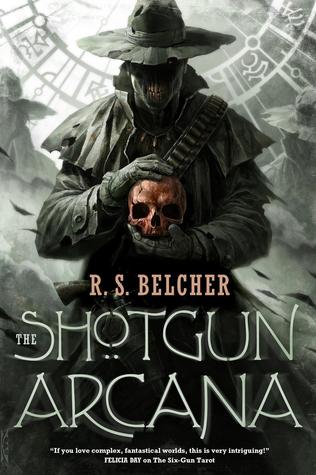 The Shot-Gun Arcana (Golgotha #2) by R. S. Belcher
Synopsis from GoodReads:
1870. A haven for the blessed and the damned, including a fallen angel, a mad scientist, a pirate queen, and a deputy who is kin to coyotes, Golgotha has come through many nightmarish trials, but now an army of thirty-two outlaws, lunatics, serial killers, and cannibals are converging on the town, drawn by a grisly relic that dates back to the Donner Party…and the dawn of humanity.

Sheriff Jon Highfather and his deputies already have their hands full dealing with train robbers, a mysterious series of brutal murders, and the usual outbreaks of weirdness.  But with thirty-two of the most vicious killers on Earth riding into Golgotha in just a few day’s time, the town and its people will be tested as never before—and some of them will never be the same.

I love the way Belcher merges real history with his fiction in this novel.  That’s  not to say he didn’t in the prequel, The Six-Gun Tarot, but it felt more obvious to me with this novel’s inclusion of actual events and people such as the Pinkerton Detectives, the Donner Party, and a number of real-life criminals (albeit under adjusted names).  In short, Belcher continues to throw in everything including the kitchen sink to flesh out his world.  And it works, because it makes that world so much bigger than it could or should be, given the social mores and prejudices of the time (ones that Belcher does remain true to in depicting the era).

The prequel didn’t shy away from violence and graphic descriptions but The Shotgun Arcana goes quite a bit farther given that we’re dealing primarily with cannibals, or at least people who include cannibalism in their actions.  The fact that most of the description is delivered rather matter-of-factly can make it easier to read in that you might not feel the images as vividly as with a different writing style.

Unfortunately, that style primarily works against Belcher since it continues to make it difficult for me to empathize with any of the characters even while it doesn’t turn me off due to some of the more graphic passages.  While Belcher cut down on the number of shifting perspectives between books 1 and 2, we still don’t spend a lot of time with a given character for a long stretch of time.  This of course further undermines Belcher’s attempts to build characters who are sympathetic in a more human way rather than as seen from one remove.

I wish I could explain that better, but it just feels like none of the characters are quite ‘real’ to me despite many of them being very 3-dimensional.  And that makes it hard to like them or to do more than root for them in a perfunctory manner.

As much as I wish I could say the plot made up for that, it doesn’t.  Oh it’s certainly interesting and the fact that time is implied to be passing relatively quickly gives the whole thing a time crunch in the abstract, but that fails to hold up to this reader thanks to the lack of urgency in the writing.  It took me a while to read this book because I continually put it down and walked away to read – or do – something else for long stretches of time without feeling the need to speed through the climax.  Even when I was at that climax!

But again, it’s not all bad.  The world is fascinating, both the people and the divine, and Belcher weaves together a multitude of faiths with ease.  And the philosophical discussion between a (demi-)god and an angel was wonderful and thought-provoking.  Whatever else may be said, Belcher has a clear view of how different faiths can coexist without contradiction.

And Belcher also does something with his series that I greatly approve of – he wraps up the main plot of the book and then leaves interpersonal relationship threads dangling to be picked up in the next book set in the world of Golgotha.  Very well done, IMHO.

In total, 3 out of 5 stars.  Do not read if you are easily offended by period typical homophobia/racism/misogyny or if you are very squeamish.  You know your limits, so read responsibly!