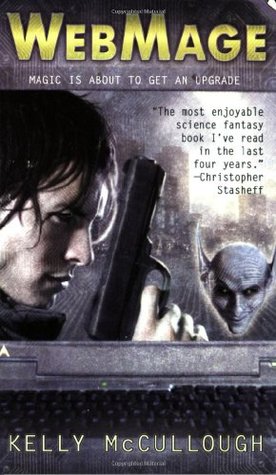 WebMage had some very good points – and some not-so-good points.  It was also, in a lot of ways, not at all what I expected going in.

The good: the idea of the world.  Mythology meets technology.  All right, tech from about 10 or so years ago, when the novel first came out, but it didn’t feel dated to me.  That might be because I’m not a programmer, of course.  Still, the idea that magic is done by coding is very cool.

On that note, WebMage throws you into the deep end without much of a life float.  The learning curve isn’t the steepest I’ve seen – not even this year – but it’s pretty sharp.  It took me a couple chapters to figure out the terminology and what was happening, but part of that is because you get dropped right into the middle of the action without pause – and part of it is because McCullough expects you to pay attention and pick up meaning from context.  None of which I had any problem with because McCullough gives you that context.

Another great aspect: the idea of multiple worlds, called Decision Loci or DecLoc for short, a la Roger Zelazny’s Amber series.  Basically, there are a bunch of worlds ranging from order to chaos, with multiple ones that are similar to the Earth we know, again much like Amber.  It was handled really well, I felt, especially the idea of Discord, the most chaotic, where Eris goddess of Chaos lives.

I also loved the idea of familiars being able to turn from creature (either goblin or troll, depending on the sorcerer/deity in question) into computer/cell/tech device.  It’s such a fantastic idea that fits great with the tech magic and allows a familiar to communicate with their master while being inconspicuous to all the muggles.

Now for the bad.  The main character.  If it hadn’t been in first person, maybe it would’ve been better.  Unfortunately, he’s an idiot with a lot of luck – aka Plot Armor – who somehow manages to survive the Furies (explained as them toying with him), the Fates, and Eris.  Also cousins who are more warrior-like than him.  He doesn’t stop to think things through, even when given time to do so, just goes from crisis to crisis to crisis.

Next issue: the Love Interest.  And yes, it needs the capital letters because that’s really all Cerice serves as despite all of the other cool and interesting things she can do.  She heals Ravirn a couple times and has sex with him or kisses him a bunch more.  The latter stuff was gratuitous, unnecessary, and a waste of pages, as well as not making much sense within the context of their relationship as established the first time we meet her.  The former…is really great, except that Ravirn says she’s also a great programmer and yet we see her do no programming, IIRC.  Also, she wears boob-plate.  Enough said.

Honestly, this would have been a good break if I were in the middle of very serious books, but I’m not.  So instead of being a rest, it was a bit of a slog.  I finished it because I loved the concept and I wanted to see how things would get detangled, but I will not be continuing this series.