Villains by Necessity by Eve Forward 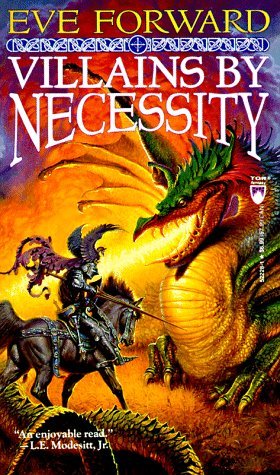 An enjoyable but predictable read, made perhaps more enjoyable by how much like a D&D campaign it read.

Synopsis from GoodReads:
With the banishment of Evil from the realms, the final victory of Good is assured-unless a few stalwart antiheroes can save the world from a serious and potentially fatal imbalance. First novelist Forward explores the complications that arise from a surfeit of “goodness” in the world. The result is a skewed version of the epic fantasy that features an assassin, a thief, an evil sorceress, a dark knight, and an implacable druid as the villains-turned-heroes who must restore the delicate balance of opposing forces before their world disappears in a blinding flash of Goodness and Light.

This book started off really slow for me because of all the innumerable cliches.  Granted it’s a book from the ’90’s, so maybe some of the cliches weren’t quite so well-worn back then but by now they’ve all been used, overused, and abused to death.  Although at least in Forward’s case she’s deliberately using the cliches because of the setting she’s portraying, so I’m willing to forgive her for them – but that didn’t make the book read any quicker or take any less predictable turns.  Even with the ‘villains as protagonists’ bit.

Thankfully Villains by Necessity took off quickly enough once we had introduced all of the characters and then I was able to zip through it, even with a relatively plodding pace interspersed with sporadic bursts of action and excitement.

Truthfully, I think if I had read this when I was younger and newer to the genre, I would have liked it a lot more.  As it is, I kept getting caught up in what I knew was coming and I wasn’t able to fully submerge myself in the story.

For me, the saving grace of Villains by Necessity is the way it reads as a written adaptation of someone’s Dungeons & Dragons game.  If it hadn’t been for that, I don’t think I would’ve been able to get much enjoyment out of reading the book.  I know that sort of adaptation isn’t for everyone, but – as someone slowly making their way through the backlogs of ‘Critical Role’ – I loved imagining how the GM was running things, how the players decided what to do, etc.

Overall, however, I don’t think I can go any higher than a 3.  It’s a solid idea but I just wasn’t able to overlook the cliches, from plot to character to setting.  Again, I think if this were earlier in my career as a fantasy reader then I think I would have enjoyed it a lot more.