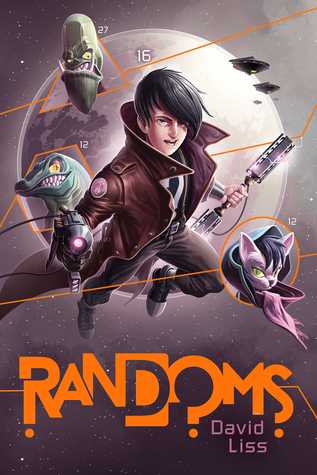 Synopsis from GoodReads:
A science fiction superfan finds himself on his very own space adventure when he’s randomly selected to join an alien confederacy in this hilarious middle grade debut novel.

Zeke Reynolds comes from a long line of proud science fiction geeks. He knows his games, comics, movies, and TV shows like Captain Kirk knows the starship Enterprise. So it’s a dream come true when he learns the science fiction he loves so much is based on reality—and that he’s been selected to spend a year on a massive space station. To evaluate humanity’s worthiness, the Confederation of United Planets has hand picked three of Earth’s most talented young people—and then there’s Zeke. He’s the random.

Unfortunately, Zeke finds life in space more challenging than he’d hoped. When he saves his transport ship from a treacherous enemy attack, he’s labeled a war criminal. Now despised by the Confederation, rejected by his fellow humans, and pursued by a ruthless enemy, Zeke befriends the alien randoms: rejected by their own species, but loyal to each other. But their presence in the Confederation may not be so random after all, and as the danger increases, Zack’s knowledge of science fiction might be the only thing that can save himself, his friends, and Earth itself.

I never know how to rate books geared at middle schoolers when I read them.  Because I like them, but mostly because I see them as ‘fluff reads’, books to give me a break or get me back into reading when I’ve hit a slump (hello entire month of April pretty much). So I guess I’m going to try and look at Randoms through the eyes of my younger self, to be fair to the book and the audience it’s geared towards.

And through the eyes of a kid who likes speculative fiction and/or anime/manga, this book is fun.  It’s wish-fulfillment in a lot of ways, it mentions all sorts of geeky sci-fi goodness, and the aliens and the way they work are fascinating – and straight out of your favorite RPG/FPS-with-stats (anything along the lines of Mass Effect or Dragon Age, basically, where you can earn experience points that you can then ‘convert’ into skill points).

Yeah as a girl I probably would’ve been annoyed by the fact that the narrator is a boy, but Zeke has the good taste to have a smart female friend around to help him out when he’s being too dumb.  And Zeke’s antics and decisions absolutely would’ve appealed to kid!me.

Heck, some of them appeal to adult!me!  But a lot of adult!me is also saying, ‘wait a minute, you’re only 11!’  And I kept thinking that a few too many times to truly say I enjoyed Randoms.

But if there’s a kid aged between 10 and 14 in your life and they like sci-fi and aliens, this might be up their alley.