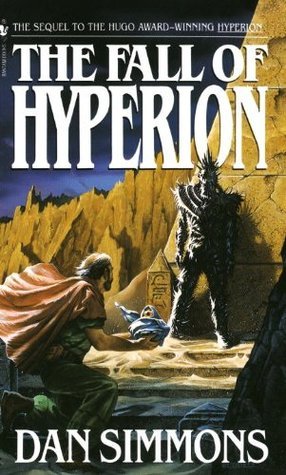 The Fall of Hyperion (Hyperion Cantos #2) by Dan Simmons
Synopsis (for book 1) from GoodReads:
On the world called Hyperion, beyond the law of the Hegemony of Man, there waits the creature called the Shrike. There are those who worship it. There are those who fear it. And there are those who have vowed to destroy it. In the Valley of the Time Tombs, where huge, brooding structures move backward through time, the Shrike waits for them all. On the eve of Armageddon, with the entire galaxy at war, seven pilgrims set forth on a final voyage to Hyperion seeking the answers to the unsolved riddles of their lives. Each carries a desperate hope—and a terrible secret. And one may hold the fate of humanity in his hands.

So this review is in a slightly different format because, well, I read book 1, Hyperion, about a decade ago.  Meaning before I had this blog, meaning there’s no review for it in my writing.  Since I decided to finally finish the series thanks to Beat The Backlist 2017, I want to write a review of book 2.  The only ‘problem’ this poses, to my mind, is how to deal with book 1 as it relates to book 2.

Hyperion is, in all honesty, The Canterbury Tales In the Future.  No, really.  Seven people are chosen to make a suicidal pilgrimage on the eve of a war, and they decide to spend the journey sharing their stories, their experiences with the world of Hyperion and the creature called the Shrike, so that they can hopefully figure out just why they’ve been a) chosen and b) allowed to enter this war zone.

The Fall picks up with them entering the area the Shrike calls home, ready to meet the creature and see what happens.  According to the legends, one of them will get their wish granted but all of them will die.

Now, in the years between reading Hyperion and picking up The Fall (after rereading book 1, of course), I’ve read another book by Dan Simmons, and I have to say that he’s got a bit of a type.  When it comes to plot and what interests him, that is.  He’s very interested in epics – epic poems, to be specific.  In the other book of his I picked up, it was The Iliad.  In this series, it’s John Keats’s poems.

It’s not just about references, either.  It’s the style of the writing.  Not dry, exactly, but not as engaging as I prefer.  And, of course, it’s the overarching scope of the book, epic fantasy at it’s finest – the Quest.  Even if it’s to face a devil character rather than an angel or ‘god’.

I realize I’m not really saying much about either of the books but that’s because I guess i don’t have very strong feelings about them.  I enjoyed the varying narrative styles – third to first, the weirdness in the datasphere, etc. – and the conclusion felt very satisfying, even if it didn’t quite line up with what I was expecting.  A bit too hopeful for something called the fall.  Having read the third book at the point of writing this, I know that it actually did end up going in a darker direction as history marched on, something I actually prefer as it makes more thematic sense with the title.

There’s a lot of philosophy in this series, religious and secular alike, but not a lot of character or character development.  At least, not outside of what got revealed by the stories in Hyperion.  I think that’s what’s making it so hard for me to write about this. (well, that and the lingering cold)

Overall, if you like epic fantasy in the style of Tolkien (meaning travelogue, philosophical, and dense), you’ll probably enjoy The Fall of Hyperion – provided you read part 1 first.

(And my first February book for Beat the Backlist!)